This is a cross-curricular and project-based activity that integrates American history, ELA, math, geography, and film making in Minecraft! Moreover, students are learning the essential 21st century skills of communication, collaboration, critical thinking, and problem solving. 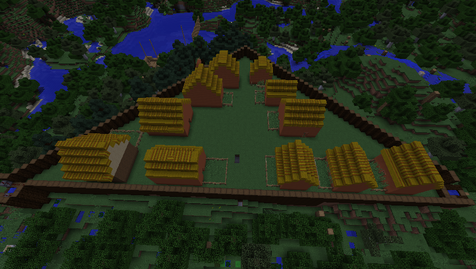 In this activity, students are challenged to focus on a key event in American history — after watching the first episode of American History of Us, we decided on the founding and settlement of Jamestown. Students then, individually, in groups, and as a class, conduct research and determine the essential historical milestones and facts that will effectively tell the story of Jamestown through a Minecraft movie!

From there, students are writing scripts, building the sets in Minecraft, and rehearsing to create a cohesive narrative. Building the sets, particularly the Jamestown settlement, is a great opportunity to integrate math, geography, and architecture. We recommend having students go through our Algebra Architecture lesson plans, Building a House and Building a Parthenon, to become familiar with the concepts of area, perimeter, and the process of creating structures in Minecraft. The Parthenon lesson plan in particular will help students develop their own equations to determine the number of materials needed to make Jamestown.*

The process of making a movie does take time, but the educational benefits are great — it requires considerable depth of knowledge in the content and develops key skills that showcase that students know the material and are able to articulate it. Plus, the level of engagement and focus we’ve witnessed while making the movie contributes to a positive learning environment — kids really come together as a group and get a kick out of making a movie!

Since this activity is highly student-driven, the experience for each class will vary significantly. We’ll do our best to provide relevant resources, questions to ask, and examples from our classes to empower students to be participatory learners and creators.

This activity was run with a 5th grade class, but the subject matter can scale up to the high school level and as low as third grade.
*We’ve provided equations we used to make our settlement, but our formulas may differ from when you run this activity in your classroom.

History of Jamestown Standards Alignment
Click on the link above to view our explanations of how this lesson plan is aligned to Common Core Math Standards.

American History of Us Documentary

Part 3 of this activity came rather organically. Students began organizing themselves into groups and began building in Minecraft, and writing scripts simultaneously. The following is an ideal situation in which all students have a chance to build sets, find skins (wardrobe for the characters), and write. However, the main emphasis is to empower students to focus on their interests and collaborate with their peers.

During this time, the teacher should act as a floater, offering guidance when necessary but promoting an environment of self-guidance and discovery.

Before including this math portion of the activity, we recommend facilitating two related algebra architecture lesson plans, Building a House and Building a Parthenon. This helps students become familiar with the concepts of area, perimeter, and seeing mathematical equations in Minecraft structures.

Defining the Variables and Formulating Equations

Rehearsals are important for kids to get comfortable moving in their own bodies and gain a better understanding of how characters move in Minecraft.

Join a community of instructors who teach with Minecraft and earn money hassle free!